The Rich History of Motorcycle Patches 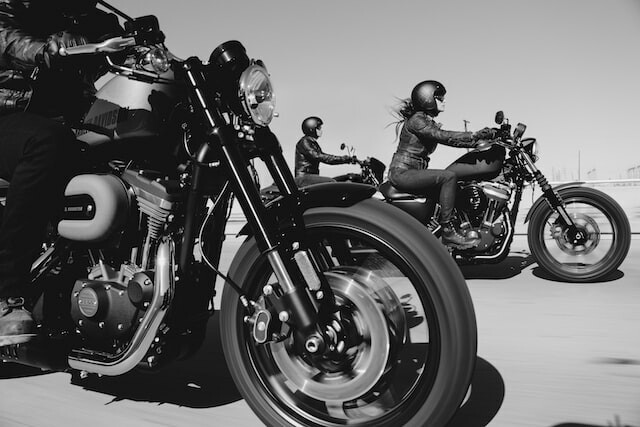 Motorcycle patches have an interesting history. What started as a way for clubs to stand out has evolved into something embraced by bikers across the globe. Let's learn more about the history of motorcycle patches, their purpose, and proper decorum.

Patches are synonymous with bikers. Besides a black tee and jeans, bikers typically don a jacket or vest with some embroidered patch or a collection of patches. The patches often show membership to a specific club or group, but they also make a statement. Custom patches also serve as a reminder of places visited, special events such as group rides, and designs portraying the biker lifestyle. Patches are an integral part of the biker aesthetic.

The Origins of Motorcycle Patches

The origins of motorcycle patches date back to the 1920s. The Motorcycle & Allied Trades Association proposed the creation of the American Motorcyclist Association in 1924, as a division of the M&ATA representing riders.

The organization would control rider registration and activities for national events, and serve motorcycle industry associates. Members would gather at AMA events throughout the country. Attendees wore jackets that included their motorcycle club logo and name and the region they represent. Riders embroidered those early motorcycle patches onto their jackets by hand.

The Hollister riot was an event that took place at the AMA's Gypsy Tour motorcycle rally in Hollister, California, in 1947. Around 4,000 motorcyclists arrived in Hollister, coming from all over the United States. The town was unprepared for the number of people.

The visitors were welcomed into bars and other businesses, but soon the bikers were riding through the streets, fighting, and damaging bars. Motorcyclists slept on sidewalks, parks, and in people's yards due to a lack of housing. Police stepped in and made arrests while bars refused to sell beer and volunteered to close early. About 50 people were arrested and the city was littered with debris, though no Hollister residents suffered any physical harm.

The riot was greatly sensationalized by the national media, dubbed "Havoc in Hollister" and "Hollister's Bad Time" by the San Francisco Chronicle. Soon after the riot, the AMA issued a statement indicating that the bikers who caused the disturbance represented only 1% of motorcycle enthusiasts. Thus the patch and term 1%er became associated with outlaw motorcycle clubs of the era. Outlaw motorcycle clubs do not necessarily engage in criminal activity, but they are not sanctioned by the AMA and do not adhere to the AMA's rules. The clubs devised their own colors, or patches, worn solely by riders of a particular club.

Patches are different for rider groups and motorcycle clubs. Patches range from simple designs to more ornate and intricate designs with logos, emblems, mottos, and insignia. Patches are known as colors to motorcycle clubs. Members wear patches on jackets and vests to identify their club and its location. These custom patches denote new members, rank, and more. The primary patch is the back patch of the club's symbol or logo.

Wearing such a patch is referred to as "flying one's colors." Full members of motorcycle clubs wear patches consisting of a top and bottom badge known as a rocker due to its curved shape. The top rocker features the club name, while the bottom rocker indicates the location or territory of the club. A central patch boasts the club's logo, while a fourth, smaller patch carries the initials "MC" for motorcycle club. Motorcycle club patches are earned and take a commitment of time and energy.

Riding groups are popular across the world. A riding club is an organization of people who enjoy riding motorcycles and riding with a group. Rider groups focus on certain bikes, interests, hobbies, and more. Associates may live in a specific area or belong to a particular profession. Riding clubs have few membership requirements, unlike motorcycle clubs. While motorcycle clubs and riding club patches are similar at first glance, they all have different restrictions. Motorcycle clubs have strict codes of conduct within their organizations. Riding clubs have fewer rules of conduct for interacting with other riders.

Like their counterparts, patches show membership to a club and the home base for the group. Many bikers will decorate their vests and jackets with unique patches representing their personality and style. Beyond the standard back patches, flag patches, name patches, political statements, and patches with funny messages are popular options for riding club patches. The most important thing to remember when using motorcycle patches is that you never pretend to be something you are not.

There are a few distinctive rules regarding patches for motorcycle clubs and riding groups. Those who are not club members can face repercussions for not following the proper protocol when placing patches. The first thing to know about patch etiquette is that you should never wear the logo, colors, or imagery of a motorcycle club you are not a part of. Motorcycle clubs are the only ones that use back patches with top and bottom rockers.

For riding groups, custom patches are less restricted. Riders club bikers often wear patches representing rallies, races, or fund-raising events without worrying about breaking any rules. These patches are typically one piece patches with unique designs that represent the event. Riding club patches can be placed anywhere on nearly any garment, including sweaters, shirts, and jeans. Motorcycle patches provide a sense of belonging, camaraderie, and a dose of style.

There is tremendous pride and tradition surrounding motorcycle clubs and patches. Motorcycle patches reflect the love of riding, a sense of tradition, and togetherness within a group. Now that you know the history of motorcycle patches and the proper etiquette for wearing them, why not design your own custom motorcycle patch? Find out more about creating custom embroidered patches, and look through our gallery of custom patches for inspiration.