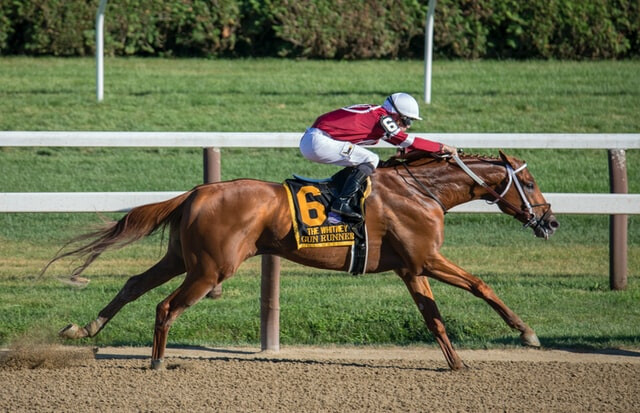 Considered the highest accomplishment in Thoroughbred racing, the Triple Crown is steeped in history. In the United States, the term refers to a series of horse races for three-year-old Thoroughbreds.

Originating in 19th-century England, the Triple Crown tradition is popular in nations that feature Thoroughbred racing. Many countries in addition to the United States, including Australia, Canada, Great Britain, Ireland and others have their own series.

Each year on the first Saturday of May, the U.S. Triple Crown kicks off with the Kentucky Derby. The Preakness Stakes and Belmont Stakes follow the Derby within a five-week timespan. Each of these races is incredibly popular, not only for what is at stake but also for the style of the horses, riders, and spectators. Custom patches are a perfect way to celebrate the Triple Crown. They are an eye-catching way to stand out on the track or grandstands.

The Triple Crown in the United States dates back to 1919 when Johnny Loftus rode Sir Barton to victory. Since then, there have been twelve more Triple Crown winners. The most recent was Justify in 2018.

The Kentucky Derby leads off the series. The event takes place at Churchill Downs in Louisville. The race's nickname, "The Run for the Roses," comes from the blanket of roses draped over the winner. It is also known as "The Most Exciting Two Minutes in Sports" or "The Fastest Two Minutes in Sports" due to the approximate duration of the race.

The Derby features several traditions, including drinking mint juleps, eating burgoo, and wearing elegant outfits, including elaborate hats for women. Another is the playing of Stephen Foster’s “My Old Kentucky Home,” which dates to the 1930s. And we can’t forget the massive party that takes place in the track’s infield.

The Preakness Stakes takes place in Baltimore at Pimlico Race Course. Dubbed "The Middle Jewel of the Triple Crown," it’s held two weeks after the Kentucky Derby and three weeks before the Belmont Stakes.

The Preakness, too, has several interesting traditions, including one that dates back to 1909. Once a winner is declared, a painter climbs on top of a replica of the Old Clubhouse cupola. The painter then applies the colors of the victorious owner to a replica of a jockey and horse situated on a weather vane in the winner's circle. Other race day traditions include singing “Maryland, My Maryland,” the official state song, and adorning the winning horse with a blanket of yellow flowers that resemble black-eyed Susans. Black-eyed Susans are the state flower of Maryland; however, the race takes place months before the flowers bloom. Originally painted flowers were used but have been discontinued. The tradition now features Viking poms. The race is also called "the race for the black-eyed Susans," but the flower is never used.

The last race in the series is the Belmont Stakes, held at Belmont Park in Elmont, New York. The oldest of the Triple Crown races, it is known as "The Run for the Carnations." This custom finds the winning horse covered in a wreath of white carnations. The race also has its own signature drink known as the "Belmont Jewel."

Each race has its own spirit and style. The traditions of the Belmont Stakes have changed over the years. This includes the post parade song, originally "The Sidewalks of New York." The song was changed in 1997 to a recording of Frank Sinatra's "New York, New York." In 2010, the song changed again to Jay-Z's "Empire State of Mind," performed by Jasmine V. In 2011, the post parade song was changed back to "New York, New York."

Jockey silks are the colorful uniforms worn by the riders. While the tops are bright and vibrant, the jockey's pants must be white. The silks worn are to stand out and feature details that make them distinguishable, including bold colors, eye-catching shapes, and vivid patterns. The unique designs and colors represent a horse’s owner and enables spectators to differentiate between racehorses easily. Adding patches to these silks is a great way to add attention and flair.

Creating custom patches that honor the Triple Crown is easy. A well-designed patch will garner attention and stand out. Like jockey silks, patches include elements that make them unique from one another. Incorporate elements that pertain to the series.

Include a mint julep for the Kentucky Derby or a bushel of carnations for the Belmont Stakes. Patches can also represent a specific stable, trainer, or jockey. The Triple Crown provides ample inspiration to get creative, including colors, unique details, and more. Honor past winners with a vibrant, beautiful custom patch.

At Patches4Less.com, we are lucky to call Ocala, “The Horse Capital of the World,” home. The area has a rich history in Thoroughbred racing, and many of the Triple Crown winners have ties to the area. Local horses have won individual races of the Triple Crown series. In 1956, Ocala's very own Needles became the first Florida-bred horse to win the Kentucky Derby. He went on to win the Belmont Stakes in the same year. Another local horse, Affirmed won all three races in 1978. We take pride in our past, and it inspires many of the patches we design today.

Creating an extraordinary patch has never been easier. They are a perfect way to celebrate any occasion. With the Triple Crown in full stride, why not celebrate in style with a custom patch for your own style or those on the track? Find out about designing your own patches here.